A wide variety of arms were used by the Irish Volunteers, who were also issued with ammo that was not suitable for a particular make or model. In addition, the Volunteers would have had little opportunity for significant training with live ammo, thus making the high casualty rate amongst the Sherwood Foresters all the more remarkable. Some Volunteers brought their own guns, such as Malone’s Mauser highly accurate pistol which was mounted on a shoulder stock. The British troops were issued with the very accurate Short Magazine Lee Enfields. 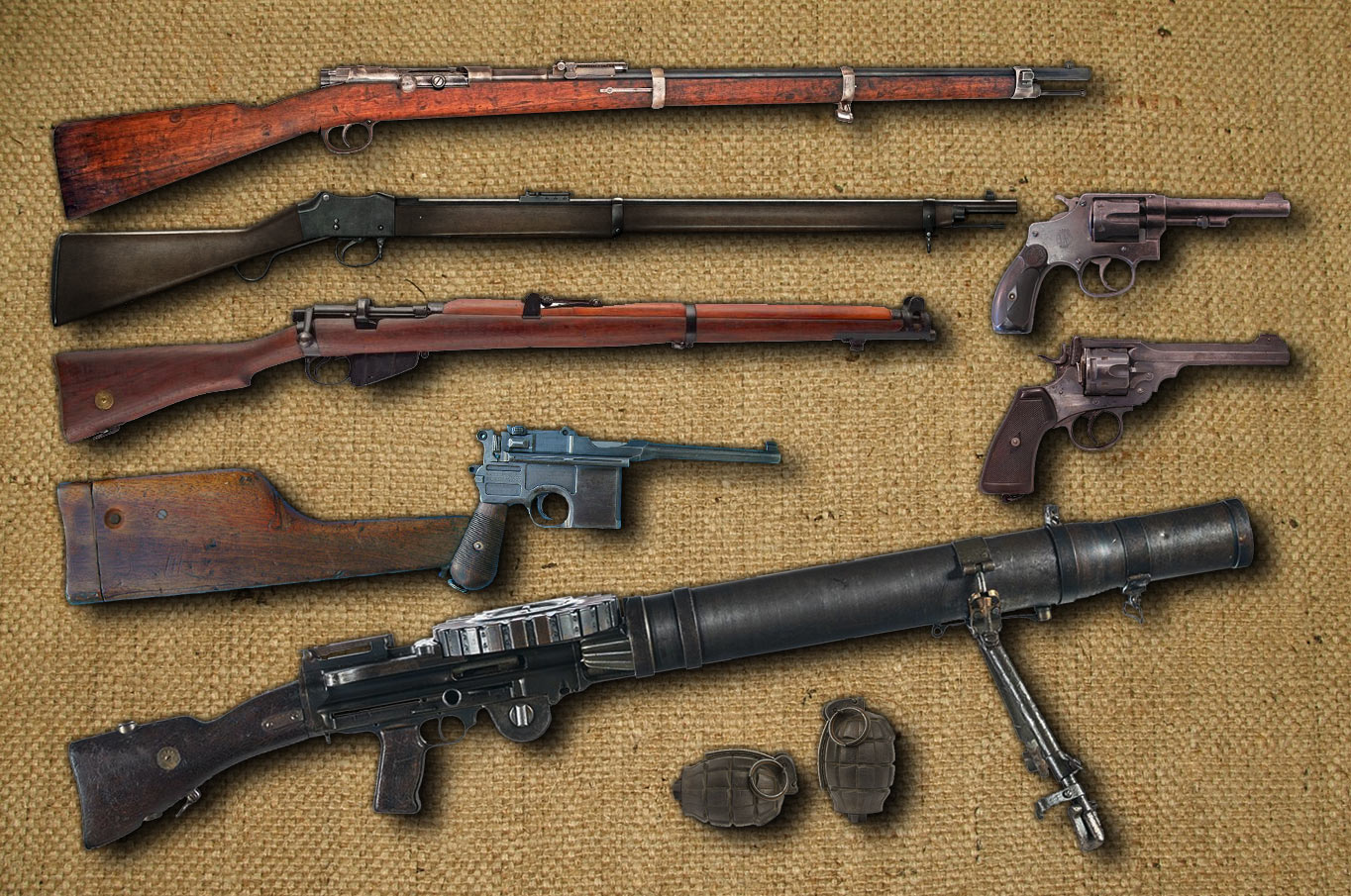 A selection of the weapons used during the Battle of Mount Street Bridge.

The Short, Magazine Lee-Enfield (SMLE) Rifle was a ten round, .303” (7.7mm) bolt action rifle introduced for the British armed forces in 1904 following the Second Boer War. Prior to its introduction, British forces used small arms with black powder propellant. This generated a large plume of smoke (firing signature) upon firing which clearly revealed the firer’s position; experience against Mauser-equipped Boers revealed the importance of smokeless powder and rapid reload for modern warfare.

By 1907 the SMLE Mk III was the mainstay British Rifle. Field testing during the first months of WWI earned it a fearsome reputation at the battles of Mons and le Cateau; British soldiers were trained to deliver controlled fire of up to thirty shots a minute in a practice labelled the ‘Mad Minute’. By 1916, the SMLE Mk III production was affected by the war, leading to the development of the SMLE Mk III*, with the asterisk denoting some production shortcuts such as the omission of volley sights and magazine cutoffs.

Captured SMLE rifles were used by the Irish Volunteers, donated or sold by sympathetic British soldiers and some may have purchased their own in 1914 as this image from the NLI indicates. At the battle of Mount Street Bridge, Irish Volunteer James Grace was equipped with a Magazine Lee-Enfield (MLE) or Long Lee-Enfield rifle that he had brought from Canada. This weapon was likely produced between 1895 and 1904. The main difference between the MLE and the SMLE lay with the MLE’s slower reload rate (the SMLE could accommodate five round chargers); the MLE was also a longer rifle (12.7cm (5 in)longer).

The Martini-Henry was first developed for the British Army in 1871, replacing the Snider-Enfield, a muzzle loaded rifle. A breach loaded, black powder, lever action rifle, the weapon was rendered obsolete by the development of the Lee-Metford in 1888. Despite this, the Martini-Henry and its variants continued to be used up to the Great War. The Martini-Henry, despite being a successful weapon in Britain’s colonial wars, suffered from cartridge extraction problems which wouldn’t be solved until 1920.

With the advent of the .303 round for the Lee-Metford, the Martini-Enfield variant was introduced in 1895 which could eventually house the modern 1904 smokeless ammunition. However, the Martini-Enfield was not designed to fire the newer mk VII ammunition (the grade of SMLE rifles). As stated by James Doyle in his witness statement, ‘we had very little VI and he [Reynolds] was afraid that the VII would be too heavy on our martini rifles.’ (BMH.WS0309, p.4) Sometime later, Doyle’s rifle exploded from repeated use of VII ammunition.

The Martini-Henry and Martini-Enfield rifles were issued to the Royal Irish Constabulary until 1905; it is possible that the Irish Volunteers acquired these rifles. Others were imported from the United States by sympathisers.

The Mauser Model 1871 (M/71) was the first of many firearms designed by the Mauser brothers for the Imperial German Army. It was introduced in 1871 to replace the Dreyse Needle-Gun of Franco-Prussian war fame. An single shot, black powder, bolt action rifle, the M/71 fired an 11mm cartridge. The design was improved in 1884 with the addition of an eight round integral tubual magazine and an case extractor (Mod. 1871/84). By WW1, the M/71 had been made doubly obsolete by the development of the Gewehr 1898, yet it was used to drill German forces and was equipped by the landwehr / landsturm (militia).

The Irish Volunteers imported 900 M/71 rifles in 1914 during what became known as the Howth gun-running episode. A smaller number came ashore at Kilcoole in County Wicklow (1,500 rifles were ‘imported’ in total). These firearms were financed by Irish Nationalist and Easter Rising combatant Michael O’Rahilly and were subsequently referred to as ‘Howth Mausers’ or ‘Howth Guns’.

Due to the weapon’s age, ammunition for it in Ireland was literally non-existent with a complete reliance on the ammunition stock imported with the rifles.. The powder cartridge, once fired, would give away the firer’s position in a cloud of white smoke. The obsolete 11mm cartridge utilised an all-lead bullet which would expand on impact creating a devastating wound; the use of these bullets had been outlawed in war by the 1899 Hague Convention and military forces had moved to non-expanding full metal jacket bullets. Despite these shortcomings, the M/71 was a fearsome weapon due to its caliber and large firing signature which gave the impression of a larger weapon than a rifle being fired at a target. The recoil of the M/71 was recalled by Thomas Walsh in his witness statement ‘…the butt hit me under the chin and knocked me out… I had received a good lesson and for the remainder of the scrap I remembered it was a ‘Howth gun’ I was dealing with!’ (BMH.WS0198 p17). However, the imparted recoil force from the Howth rifle is actually less than a Lee Enfield rifle and Walsh’s unfortunate injury indicates a low level of small arms training.

The C96 handgun, nicknamed the “broomhandle” (due to its grip) was a ten round, 7.63x25mm semi-automatic pistol produced by German arms manufacturer Mauser from 1896. The C96, due to its long barrel and grade of ammunition, had a superior range compared to other handguns of the time.

Initially overlooked by the German army in favour of the 9mm Parabellum Pistole, or Luger, the onset of war required the C96 to address weapon shortages. In 1915, the C96 was refitted to house the 9mm Parabellum round, leading to some 137,000 9mm C96’s produced. Known as a ‘red C96,’ the 9mm variant was denoted by a red number nine stamp on its handle. Both the Ottoman Empire and Austro-Hungarian armies utilised the C96 in the field, marking it as a relatively well-represented weapon in the Central Powers’ arsenal.

The Irish Volunteers referred to the weapon as ‘Peter the Painter’ after the underground figure of the same name who allegedly used one in the Siege of Sidney Street of 1911. Lieutenant Michael Malone, commanding officer for the Irish Volunteers at Mount Street Bridge, was armed with a 7.63mm C96. The use of a shoulder-stock which doubles as a holster for the pistol was first employed on the M1898 pistol carbine model.

Regarding Malone’s C96; ‘Lieutenant Malone was the crackshot of the 3rd Battalion with the Mauser automatic and in the main battle on Wednesday he wrought terrible havoc among the enemy with it.’ (James Grace, BMH.WS0310 p.7)

The Webley revolver was the standard sidearm for British and Commonwealth armed forces from 1887. A top break, double action, six round, .455” caliber revolver, the Webley replaced the older Enfield Revolvers. As the weapon was designed to evolve rather than be replaced, the British Army were to be equipped with the Mk V Webley upon the outbreak of WWI. Despite this, the most common model when the war began was the mk IV or Boer War model developed in 1899. By 1915 the Webley mk VI would become the standard sidearm for all branches of the British armed forces.

The Webley featured automatic extraction; opening the breach of the weapon would eject the spent casings, making it a relatively easy weapon to reload swiftly. The double action feature enabled the revolving cylinder of ammunition to cycle automatically via pulling the trigger rather than having to manually pull back the hammer.

The RIC were outfitted with the appropriately named Webley RIC in 1868, it being the first double action revolver developed by Webley. The RIC design was appropriated for the creation of the British Bull Dog revolver, itself manufactured up until 1917. It is possible that the Irish Volunteers outfitted themselves with these RIC revolvers alongside the more common mk IVs during the Easter Rising. Thomas Walsh’s witness statement mentions his use of a .45 revolver but unfortunately does not specify which type.

James Walsh is referred to throughout Thomas Walsh’s witness statement as using a .32 caliber revolver. This revolver could potentially belong to the Smith and Wesson Model 1903 .32 hand ejector series of revolvers. The M1903 went through five changes throughout the period between 1903 and 1917. As such, it is difficult to pinpoint which change Walsh’s handgun belongs to without seeing the weapon’s serial number. However, the variants all shared common characteristics.

The variants of M1903 were built upon the I or ‘i’ frame and were six round, double action, hand ejector revolvers. Differing from the Webley, which was top break operated, the M1903 required a user to manually eject the casings by swinging the revolving cylinder out on its hinge and pumping the ejector rod housed within. This design was intended to differentiate the Smith and Wesson brand from the top break revolvers of the time.

Irish Volunteers likely received these revolvers from sympathisers in the United States. Constance Markievicz was equipped with a Smith and Wesson .32 caliber revolver during the Easter Rising.

The American-designed 1911 Lewis gun was one of the first light machine guns (LMG) ever designed. It entered service with the Belgian Army in September 1914 before being adopted by the British Army in 1915. Capable of firing 550 rounds a minute, the Lewis could be operated by a single user. More portable and easier to manufacture than the heavier Vickers machine gun, the Lewis was adopted for aerial, tank, and infantry use.

Air cooled and with its distinctive drum magazine resting atop the gun, the Lewis could chamber 47 or 97 British .303 rounds (used in the SMLE) and the Mauser 7.92mm rounds. Thus leaving both German and British forces well equipped for use on the Western Front.

When the Sherwood Foresters departed Liverpool for Kingstown on Tuesday April 25, their Lewis guns were left behind due to a lack of room aboard the steamship Ulster. Their Lewis guns didn’t arrive until Thursday the 27th. James Doyle in Clanwilliam House recounts that on that Thursday ‘…a machine gun opened up on our position. The sashes of the windows were cut to pieces. Reynold’s shouted “Keep well down, lads.”’ (BMH.WS0309 p.9) The volume of fire allowed the Sherwood Foresters to advance on Clanwilliam House and force out the Volunteers.

The standard hand grenade utilised by the British Armed forces in the First World War was the No. 5 pattern Mills Bomb. Based on the designs of Belgian captain Leon Roland, the Mills bomb was a percussion cap or time fused fragmentation grenade introduced in 1915. Designated grenadiers or “Bombers” were instructed to toss the device as one would bowl a cricket ball. A British bombing team consisted of about nine men broken down into throwers, carriers, bayonet men and “spare” men.

At the battle of Mount Street Bridge the Sherwood Foresters arrived from Liverpool without Mills bombs, just as they did without the Lewis guns. On the Thursday, suppressing fire from the freshly introduced machine guns allowed British bombers to get close to Clanwilliam house. As James Doyle recounts, shortly after the machine gun began to cut the sashes on the windows to pieces, ‘I heard a terrible explosion and almost the whole ceiling in the room fell down and I could see very little with dust and smoke…”I think the roof is on fire, Jim!”’ (p.10, BMH.WS0309)

What happens next matches the description of the British bombing party; ‘Suddenly, some soldiers (about 4) rushed out of the back door of the house to the garden I was in. They had their bayonets fixed on their rifles.’ (p.11) The method of clearing trenches on the Western Front was adapted for clearing buildings in an urban warzone.